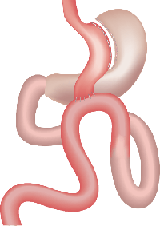 The main disadvantage is that bile can directly enter the stomach (or even in the esophagus). Chronic bile reflux could be associated with an elevated risk of malignancy and is the reason Mini Gastric Bypass is still not officially approved in the USA.

Based on scientific research, weight loss in our patients occurs as follows.

These numbers may vary depending on the eating, drinking and exercising habits of the patient..